Our teams
Join our teams 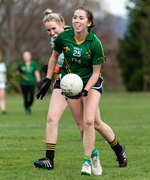 Our women's football team boasts the largest numbers of our club's teams. With 30+ regularly lining out at training, it makes for a competitive group which regularly fields two or even three teams at national tournaments. They have enjoyed much success over the years with victories at national tournaments and, mostly recently, a memorable win on the international stage. In October 2022, the team won the Australasian State Games in Melbourne for the first time in our history, defeating South Australia to win the intermediate tournament. It was our club/state's first win at the tournament in the 34 years we have been competing. New players – whether you've lined out at Croke Park, or just learned about the game today – are more than welcome to join the team. You can learn more about women's Gaelic football on the Ladies Gaelic football website. 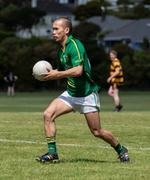 Our men's football team has been a mainstay of the club since our inception in 1986. The team are regular competitors at national games and Australasian State Games, first appearing at the trans-Tasman tournament in 1988. The team has a number of highlights over the years, including an Australasian State Games final appearance in 2010 (narrowly losing out against Queensland after double extra-time), several Feis sevens wins, and, most recently, a New Zealand Championships win against a strong Auckland side in 2021 – the team's first win in the competition's current format. The lads are currently coached by player-manager Enda Costello and Damien Farrelly. Newcomers are always welcome to come along and join the team. You can learn more about men's Gaelic football on the Gaelic Athletic Association's website.

Camogie has been played sporadically by Wellington teams since the earliest Feis competitions in the 1950s. From 2014 to 2016, a concerted effort was made to establish a team to compete at national tournaments. Since then, not only have our camógs competed on the national stage, they have claimed some individual and team honours to boot. Orlaith Walsh was named player of the tournament at the 2018 New Zealand Championships in Auckland, while the team's first triumph came at the 2020 Wellington sevens tournament. The team is currently coached by player-managers Eilís Ní Chaiside and Heather Williamson. Whether you're a veteran player or you're just hearing about the game for the first time, you're more than welcome to come along and give camogie a go. You can learn more about camogie on the Camogie Association's website. 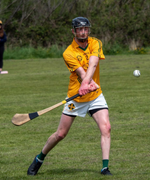 Hurling has been played in Wellington on and off over the last 130 years (since New Year's Day 1891, in fact).  After experiencing a dormant period for a couple of decades, the game was revived at the club in the mid-2000s and it has gone from strength to strength since. As part of a New Zealand team, the hurlers reached the Australasian State Games semi-finals in 2015. In 2021, they won the New Zealand Championships for the fourth consecutive year, and they have a number of Feis sevens titles to their name also. The Canterbury hurlers have been the team's main rivals over the last decade and the sides have played out some of the most thrilling hurling games seen this side of the equator. The team was coached by player-managers Patrick Dempsey and Darragh Corboy in recent years. Following their departure from the capital, Peter Hayes and Keith Cleere have inherited the dual player-manager responsibilities for the 2022/23 season. New players are always more than welcome to come along for a poc around. You can learn more about hurling on the Gaelic Athletic Association's website.