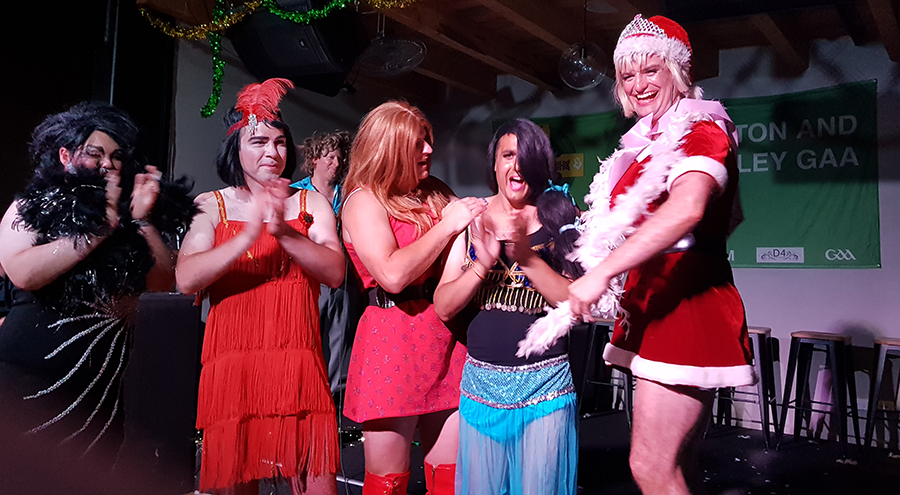 The 2017 Wellington Bros of Tralee beauty pageant took place on 9 December at D4 on Allen.

The five bros were competing for the crown were Helluva Bottom-Carter, Alotta Bush, Jas-a-mine Miarase, Fdel Tweeney and Connie Linngus. All the bros were looking absolutely wonderful on the night.

The master of ceremonies was Wellington/Hutt Valley GFHA’s very own Donal Kavanagh who had the crowd entertained all night long. Credit must go to the organising committee who planned the night successfully – Damien Moloney, Christine Ouellette, Ciara O’Leary, Laura O’Leary, Edel Sweeney, Chris McArdle, Eimear Rodden, Kate McCarthy and Jolene McLaughlin. A special hat tip must go to Josh and Cathy along with all the staff at D4 on Allen for their assistance with planning and operations on the night.

After a very entertaining Q&A session with our contestants, it was time for our bros to tackle downing a pint and eating a dry weet-bix. This provided some fantastic entertainment for our audience with Connie Lingus taking first spot in the challenge.

The finale of the night led us to the lip sync battle and some fantastic performance with special credit to Jas-a-mine with a tantalizing rendition of Jai-Ho.

The bros beautifully came together in a show of unity, to give a rousing, collaborative rendition of B*Witched’s “C’est La Vie”. This really got the crowd going and left judges Dermot Murphy, Eoghan O’Leary, Edel Sweeney and Miss Karla Maxx with some tough decisions to make.

In the end, after much deliberating, Miss Helluva Bottom-Carter was announced first runner-up and the crown was deservedly awarded to an ecstatic Alotta Bush. Her Mean Girls-esque version of Jingle Bell Rock was the deciding factor in the end. Miss Karla Maxx, our head judge, presented the victor with her tiara and sash as all the other contestants cursed under their breath, but managed a smile in congratulations.

A massive thank you must go to our wonderful contestants Corey Burgess, Séan Conlon, Damien Farrelly, Ronan O’Malley and Michael Pointin for their time, effort and being fantastic sports.

A great night was had by all and the celebrations and merriment continued long into the night. Wellington/Hutt Valley GFHA would like to thank our sponsors D4 on Allen and all their staff for hosting the event, helping with the organising and being great on the night.