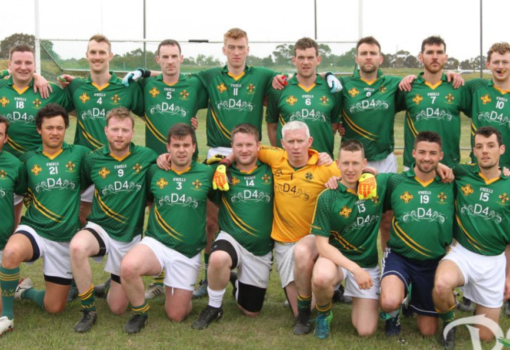 Rivals at the 2018 intermediate competition in Melbourne, Wellington and Canterbury players will this year be joining forces to form a regional New Zealand team, and they will play under the name Canterbury/Wellington. Combining the black of Canterbury and the green of Wellington, the team will don a new O’Neill’s-made strip for the tournament. Michael Daly of Canterbury will manage the team and Dessie O’Brien, also of Canterbury, will be the assistant coach for the week. Canterbury’s Keith Enright and Wellington’s Damien Moloney will share the captaincy.

The 2018 intermediate competition saw the teams meet twice, drawing in the group stage while Canterbury claimed a one-point win over Wellington in the semi-final. The men from the Garden City went on to lose the final to a strong Regional Victoria team.

22 players will make the trip across the Tasman for the annual tournament — 13 from Canterbury and nine players from Wellington. The Cantabrians will look to experienced players like centre-back Martin ‘Murch’ Connell who won an All-Star at last year’s games; half-forward Shane Flanagan who is sure to be an ever-present threat on the forty; and full-forward Darren Costello — also a 2018 All-Star — will offer the New Zealand outfit an imposing presence around the square. From Wellington, the team can rely on Australasian Games veterans Enda Costello, co-captain Damien Moloney while fresh from his World Games experience with Australasia last August, 2018 All-Star Paddy Dempsey can always be relied upon for his stoic defending. A full squad list can be found below.

It is certain to be a physically demanding week for the team; they will play six games in three days with the possibility of playing a seventh – the final – on Saturday. That combined with the hot Queensland sun means regular squad rotation will be a major consideration for the management team.

A tough contest awaits in their opening game of the tournament on Wednesday morning where they take on reigning champions Regional Victoria. Queensland Intermediates and the fast-running South Australia team, who are made up of predominantly AFL players, are also going to offer stern competition in the intermediate grade. They will play each team once and their final position in the round robin table will determine who they play in the semi-final on Friday. Canterbury/Wellington will also play two challenge games, one against Queensland seniors on Wednesday afternoon and a Thursday morning encounter against New South Wales seniors.

Each final will be livestreamed on the Australasian GFHA Games Facebook page. Following the games the teams will head to the Gala Ball and Awards ceremony at the Royal International Convention Centre where we hope our lads will claim plenty individual and team awards to bring back across the ditch. We wish the team and management the very best for the football-filled week ahead.