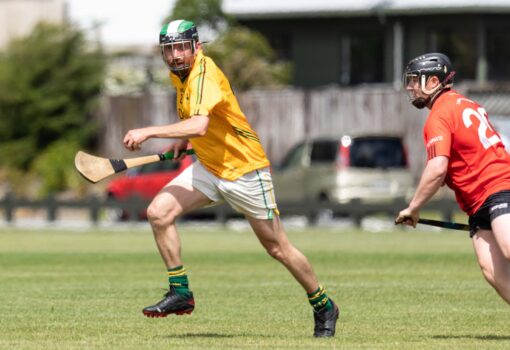 An epic hurling league came to a conclusion on Friday 27 November as the Red team claimed the Morning Star Cup with an extra-time win over the Green team in a nail-biting deciding game at Ian Galloway Park.

It was Felim O’Leary’s Green team who gained the early advantage in the three-game league with a seven-point win in game one. A more coherent side in game two, the Red team, captained by Dean McMahon, paid back in kind with a 12-point victory to keep the league alive going into game three.

Despite horizontal rain and the worst of Wellington’s wind, the decider was every bit as entertaining and high-scoring as the first two games. Playing with the “breeze” in the first half, the Green team made it count as they amassed 5-6 to the Red team’s 0-5 before the short whistle.

But if ever there were a game of two halves, this was it. The wind and rain didn’t abate in the second half and now the Reds used the conditions to their advantage. A scoring salvo saw them claw back at the 16-point half-time deficit, but the Greens held on and mustered a few goals on the break to keep the Reds at bay. It took a last-second point from the Red team to bring the game to extra-time.

The additional period was all the Red team’s as they built on their second-half momentum and a few early points – which put them in the lead for the first time in the game – were the fillip they needed to drive on and secure the game. The win meant they claimed the league, and the Morning Star Cup, by two games to one.

Thanks a million to match officials Laura McQuillan, Aoife Kerrigan and Sheila Forde for putting up with the lads’ guff over three games as well as some typhoon-like conditions in game three.

And finally, our tally shows a whopping 43-106 (235) was racked up between the two teams in three games – we don’t know about you, but we’re not sure you’d find such high-quality hurling anywhere else this side of the equator.