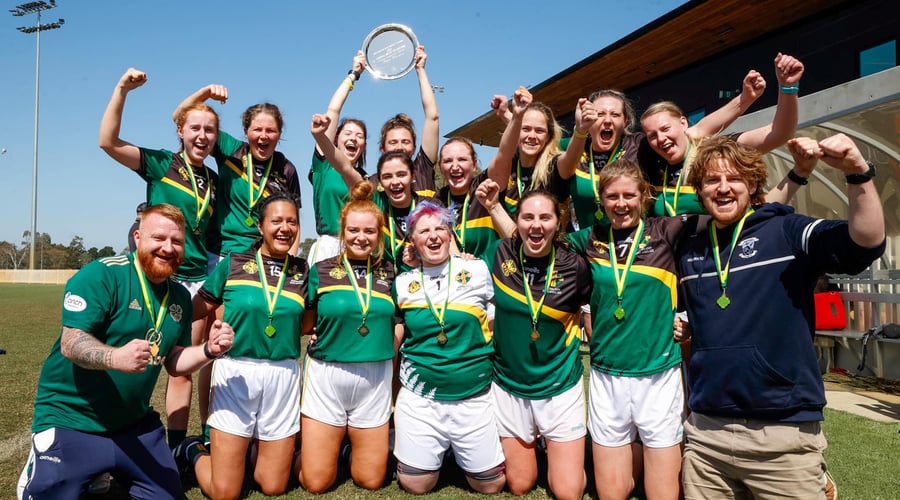 Our women's footballers created history in Melbourne on Saturday 1 October when they won the Australasian State Games intermediate tournament, defeating South Australia 8-9 (33) to 3-11 (20) in a cracking final. It's an absolutely amazing achievement from a fantastic group of players. We've competed at the games on and off since 1988 and this is our first piece of silverware at the tournament in those 34 years.

Whether it was the jet lag or opening-game jitters, the girls got off to a sluggish start in game one against South Australia where they succumbed to a heavy defeat. However, they quickly bounced back in game two with a convincing win over tournament hosts Victoria.

Into the final and we had already made history. Before this tournament, our women's footballers' only win at the State Games came in 2015 against New Zealand rivals Canterbury, so, at least historically speaking, we were well and truly in bonus territory here. Unsurprisingly, it was South Australia who were to be our opposition in the final.

Day three and conditions were perfect at La Trobe Sports Stadium for finals day. Thanks to the wonders of modern technology, our supporters back in Wellington – and in Ireland – were treated to a livestream of the final. South Australia got out of the traps quickest and picked off an early goal and a few points. Their fast running game was impressive – including the deployment of their keeper as an extra outfielder – and it was clear to see why they came into the final undeafeated.

However, down by five points in the opening minutes, our girls weren't fazed and gradually imposed themselves on the game. Strong running from Eilís Ní Chaiside, Aisling King, and Andrea O'Reilly relieved pressure on our defence and, in moving the ball up the pitch, we began to pick off scores, including two quickfire goals from Andrea and Aisling which put us into the lead. The remainder of the first half was very much a tit-for-tat affair with the teams exchanging scores, but we did take a two-point lead in at the break – 4-3 to 2-7.

The second half saw the same free-flowing football as the first, but early on it was clear the game was tilting in our favour. While we continued to raise green and white flags, our defence, led by captain Heather Williamson in goal through to Jennifer Downey, Mairéad Bogue, Tiaré Verenitani, Kate Coyle, Joanna Sharp and Anna Muru Paenga, put in trojan work to limit the Aussies' scoring opportunities.

The old adage of "goals win games" was beginning to ring through, as, while many of South Australia's attacks broke down due to our superb defending or resulted in a point, our girls were going for the jugular and hitting the back of the net regularly. Aisling King – who must've clocked up the bones of a marathon distance come the final whistle – and Andrea O'Reilly – whose scoring tally we're still trying to tot up – were proving too hot to handle for SA's defence.

South Australia battled hard until the end, and continued to show why they were such dangerous opposition throughout the tournament. In the final minutes, however, we had built up an unassailable lead and it was clear we would be seeing the game out. The final whistle brought about jubiliant scenes on the field – and in Wellington – as the girls won the State Games for the first time in our history. Commiserations to the South Australia team who played some excellent football throughout the tournament and who fought hard until the very end.

Probably the most satisfying aspect of the team's win was the vast improvements they made between their first and final game. Remember, they were defeated by South Australia by a 29-point margin in the opening game. To come back and win the rest of their games, including an emphatic final win against South Australia, is a testament to the team's belief in themselves, and their character.

While we had plenty of on-field heroes, the team's success would not have been possible without the support they had before and during the tournament. Big thanks to tournament team assistants Kevin Brannigan and Sam Bircham, and to Sam for his great snaps of the games. A big bualadh bos also to the top-class coaching duo of Davey Rynne and Ronan O'Malley who trained the team in the lead-up to the tournament and who clearly had them in fine fettle and playing some brilliant football. And to all of you who attended and supported the quiz fundraiser – your support went a long way in getting the girls to Melbourne.

It's also fair to say that this success has been years in the making – so here's a thank you to all the players and coaches who have gone before. The work and committment you each put in over the years has undoubtedly contributed to this victory.

Relive the action from our historic state games win on our YouTube channel: www.youtube.com/watch?v=JwO7CcFZtf8&t

While it took 14 stars to bring home the silverware from the tournament, we did have a few standout performers who picked up tournament All-Star awards at Saturday's gala ball:

Well done to each of you. And a special shout-out to Andrea O'Reilly who duly won player of the tournament after some outstanding performances over the three days.